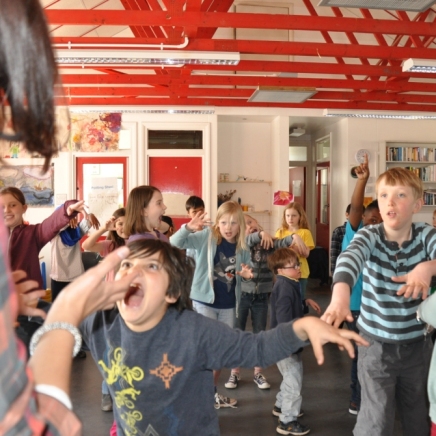 Zombies and phantoms during the music activity

Proud of our web

Proud of our web

Beware of my web!

Some playing before cleaning!

What do spiders and curators have in common? Spiders cast intricate and connected webs; curators create connections or webs of meaning. And that’s what the Year 4 pupils did today—create connections of meaning between different artworks. The session ended up with the children literally creating a spider-like web of connections with the artworks using string and descriptive meanings written on paper.

We also used music for the first time in these sessions—to great success! We began by playing tracks from different music genres to help reinforce the analogy that artists—like musicians—use their work to express themselves and art lovers, can respond to artworks in different ways, like listeners do to music. The pupils acted out how they felt to different tracks. There were some amazing responses—one pupil felt ‘sad’ when listening to Here Comes the Sun by The Beatles; whilst another felt ‘smiley’ and ‘energised’! It was also encouraging that the children very quickly made the differentiation between what the music was trying to say, and their own reaction to the music.

Once we had refreshed the idea of how an artwork can encompass more than one meaning using music, we then went on to explore and connect different meanings using a selection of artworks. It was great to see was how much the children played back discussions from previous classes. There was much lively debate too—a fantastic example of how art can create a dialogue and facilitate critical thinking.